If it wasn’t for book club, I would never have picked up a book decades old, by an author whose signature novel I had already read years ago (‘The Joy Luck Club’). But it was good, and I while I was reading it I ran across a very similar book that just came out by a Canadian author with so many parallels!

‘The Joy Luck Club’ and ‘The Kitchen God’s Wife’ are about mother-daughter relationship and Chinese-American culture clash. The story flashes back to abuses and secrets in Pearl’s mother’s life back in China. The reader gains empathy for the typical cranky, harsh and ever interfering Chinese mother by revealing her terrible past and how all she every wanted was for her daughter to be happy and healthy. It’s an immigration story really, with life in China being so very different from America in terms of family obligations and the status of women. Tan has written a fiction, but much of what is in her novels she has gleaned from her own family. In the novel ideas of luck, fate, and destiny are constantly juxtaposed against choice, self-determination, and free will.

Elaine Lui is a gossip columnist (LaineyLui) and reporter who has just published a funny memoir called: ‘Listen to the Squawking Chicken: When a Mother Knows Best, What’s a Daughter to Do? A Memoir (sort of)’. Although I have not read her book, listening to Shelagh Rogers interview her on The Next Chapter, I was struck by how similar Tan and Lui’s stories are. There is pain and abuse in both their families but also hope and love. Both have stories about how superstitious Chinese people are, how they love to play Mah Jong, and how important honour in their families can be. 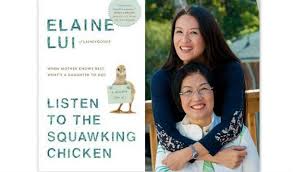 Elaine says this: “Most people think I’m exaggerating at first when I talk about the Chinese Squawking Chicken. But once they actually spend some time with her, they understand. They get it. Right away. She’s Chinese, she squawks like a chicken, she is totally nuts, and I am totally dependent on her.” Lui says that even though her mother’s voice is irritating and her parenting style exasperating, her mother’s voice remains the voice in her head and she is devoted to her. Interesting to me is Lui’s decision to not have any children of her own.

This entry was posted in Fiction and tagged Amy Tan, The Kitchen God's Wife. Bookmark the permalink.