Just after I’d listened to a podcast of Australian author Tim Winton being interviewed by CBC’s Eleanor Wachtel of Writers and Company, and thinking I’d really like to read one of his books one day, a friend and fellow book lover sent Cloudstreet my way. Thanks Conny! I really loved this earthy and epic Australian classic. In the interview Winton says he often begins his novels by creating a place and then filling it with people. In this case, it is a big rambling house which in itself becomes like a character in the novel. The two couples who live in the house couldn’t be more different. One couple are hardworking God-fearing folks, and the other couple are licentious wastrels who depend on luck.

“Struggling to rebuild their lives after being touched by disaster, the Pickle family, who’ve inherited a big house called Cloudstreet in a suburb of Perth, take in the God-fearing Lambs as tenants. The Lambs have suffered their own catastrophes, and determined to survive, they open up a grocery on the ground floor. From 1944 to 1964, the shared experiences of the two overpopulated clans — running the gamut from drunkenness, adultery, and death to resurrection, marriage, and birth — bond them to each other and to the bustling, haunted house in ways no one could have anticipated.”

Cloudstreet is a fantastic reading experience that will stay with me for a long time (complete with interesting magical touches like an Aboriginal ghost and a talking pig). It is a family saga with characters that are unforgettable and the humour Winton uses to tell the story is no-nonsense and quintessentially Aussie. There are hilarious scenes but also tragedy and heartache in equal measure. The writing is so packed with good stuff that it is not a quick read and often huge reveals are conveyed in just a few words that make you go “wait, what just happened?” A lot of reviewers speak of rereading the book and making new discoveries each time. The novel is beautifully crafted, uniquely described, and worth a careful reading. A television miniseries adaptation of Cloudstreet came out in 2011. I found it fun to watch the trailer. Although I’ve never been in Perth, I think the setting would be recognizable to locals and even includes an historical appearance of the ‘Nedlands Monster’, a serial killer from the early 60’s.

Winton is a surfer, as many Australians are. He says writing is much like surfing, because much of it involves just waiting until the wave comes in and then being prepared to ride it out when it does. Winton is often called the “bard of Western Australia.” He recently put this piece of excellent writing into the Australian political scene regarding migrant boats, an issue much in the news lately for many parts of the world. He gave this passioned and compassionate plea on Palm Sunday: 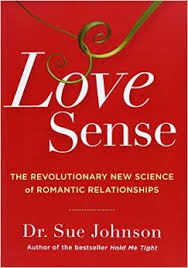 Is love a mysterious power? Can our feelings and emotions be trusted? What happens when the feeling fades? How can relationships be fostered, nurtured, and maintained in our individualistic society? Dr. Sue Johnson brings a paradigm shifting message about this. She says, “Defining love as a mystery beyond our grasp and control is as toxic to the human species as poison in our water. We must learn to shape our love relationships.” It’s all about connection.

Staying connected is a basic human need, although some may see it as weakness. Actually, the more connected we are, the stronger we are. This book is mostly for couples but it does have something for everyone, no matter what your age, relationship status, gender, or orientation. Dr. Johnson explains the science of love, and it actually just makes sense. And believe me, by being scientific about it, she does not take the romance out of it!

If you are in a good relationship, this book can be affirming and will highlight how your love can be deepened. If you are in a troubled relationship or feeling distant from your partner, finding a therapist who uses Emotionally Focussed Therapy (EFT) can help. Dr. Johnson also has another book which is a self-help manual for couples called Hold Me Tight. ‘Love Sense’ is highly readable and helpful. It will change the way you think about love.

I heard about this author from a friend who is an EFT certified therapist.  Thanks Irene!! Have a look at her website, it might be a lifeline!
Couples In Step
Here are some links to more information on EFT and Couples Retreats.

‘The People in the Trees’ by Hanya Yanagihara 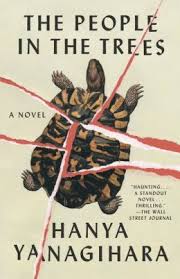 In 1950, a young Nobel prize winning doctor named Norton Perina embarks on an expedition to a remote Micronesian island in search of a rumoured lost tribe. There he encounters a strange group of forest dwellers who appear to have attained a form of immortality that preserves the body. Perina uncovers their secret and returns with it to America, where he soon finds great success. But his discovery is not that simple and it comes at a terrible cost to the islanders and their way of life.

This anthropological adventure story is a dark and disturbing tale of power and its abuses, loosely based on real events. Not everyone who goes to remote regions of the world to do good work is actually good. And not everyone who does bad things, thinks that their actions are bad. The unreliable narrator in this story always puts a positive spin on things, but the author skillfully lets the reader know that all is not as it seems and it’s not hard to work out the truth. Yanagihara has written something both elegant and terrible. I am actually looking forward to other books by this author because I did enjoy her brilliant crafting of the story, although her writing may not be for everyone.

The novel is at times beautifully descriptive and at times so graphically awful that if it was a movie I would have covered my eyes and looked away (hard to do when reading a book!). So this is a reading experience not for the feint of heart, but if you can handle it, quite unique. Some people tolerate dark and provocative literature better than others, and some even prefer it. In my opinion literature is a good place to confront the dark (from the safety of an armchair), especially for children. It creates understanding and empathy and raises issues that though we may not like to think about, are certainly part of our broken world.

Tagged Hanya Yanagihara, The People in the Trees

‘The Paying Guests’ by Sarah Waters

Frances Wray and her widowed mother are rattling around in their big Victorian house after the war, and because they desperately need the money, they decide to take in The Barbers, a young married couple. They call them “paying guests” instead of lodgers, since it is a much nicer term and will sound better to the neighbours. So much of this book is about “keeping up appearances” and though the Victorian era may be just over, a lot of the class distinctions and worrying about manners and how people should behave, are at the centre of this novel.

Frances pictures herself as merely the landlady in charge of the welcome shillings that the new arrangement will generate, but she is unprepared to become quite so involved with her new tenants. This is the first book I have read by Sarah Waters, and I must say she did have me hooked into the dark and atmospheric sensual story of lies, secrets, adulterous sex, and murder. This is a very long but compelling melodrama and quite slow in movement, but it certainly is a nail-biter at the same time. The ending did leave me feeling empty and I wonder if that was the author’s point. As one reviewer put it, it “left me feeling like a wrung out dishcloth” and with this I must agree. I won’t say more because that would spoil it.

Shortly after finishing the book I ran across a BBC article which talked about roller blading in the Victorian era. Roller blading does feature in an episode in the book. The sport was fun but it also allowed couples to actually hold onto each other in very intimate ways, right in public, and no one would mind! Here is a link to the article: The Victorian Craze that sparked a mini-sexual revolution

Just yesterday the shortlist for the Baileys’ Prize was announced and this book is on it. Personally, I am disappointed that Elizabeth is Missing or Station Eleven did not make the cut, but then so often the award winners we wish would win are not the ones that get picked. I am grateful, as always, for the Baileys’ long-list, which always highlights so many good reads, including this one.