‘The Secret River’ by Kate Grenville 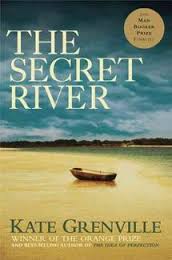 The librarian where we meet for book club, described this as a very good read when she handed us our latest assignment and called it “a proper story.”

I did thoroughly enjoy this slice of Australian history because it didn’t try to be too epic nor did the author take sides in the conflict–she lets the reader decide and wonder what they would have done in the same situation. Though full of great literary themes, the story is focused primarily on one couple and their young children as they try to survive in a harsh and foreign land. This makes it simply readable as a story, but at the same time the reader cannot help but examine the choices that this couple make.

William Thornhill and his wife Sal travel to Australia from London on one of the early convict ships. Will is not a bad man, driven by impoverishment to make unsavoury choices. He escapes the gallows but ends up in another sort of prison and engages in another type of theft. Sal dreams of returning to London one day, but William falls in love with the land on the Hawkesbury River and this becomes his fatal flaw. It is a wild and lonely place except for the indigenous people who are living there already, but who are discounted as savages by those settling and ‘civilizing’ New South Wales. A settler’s dream becomes an Australian nightmare. It is a painful history familiar from so many colonial stories. Grenville does a beautiful job of quietly crafting the Aborigines’ voice and representing their loss.

Every one of the settlers in the book has chosen a different way of interaction with the indigenous people. Miscommunication and misunderstanding abound, but for some, a quiet “give and take” is what works best. In that regard it reminded me of The Poisonwood Bible, a novel offering several different approaches to missionary work in Africa embodied by various characters. Grenville’s great-great-great grandfather was a convict himself, sent from London to Australia in 1806. It was the desire to understand the history of her ancestors that motivated her to write these books.

The Secret River is part of a three book ‘Colonial Trilogy’.  The Lieutenant  and Sarah Thornhill being the other two. The Lieutenant was written after but is set before The Secret River and is an exploration of the first contacts between whites and blacks before the violence took over and when conversation was still possible. Sarah Thornhill is a loose sequel to the other two, taking up the story in a third generation that must deal with what history has created. I definitely will read the other two in the trilogy at some point. Grenville gives a masterful touch to a troubled tale–a proper story indeed. I know we will be having a great discussion at book club this month.  The Secret River has been adapted for stage and screen.