‘The Thief’ by Megan Whalen Turner 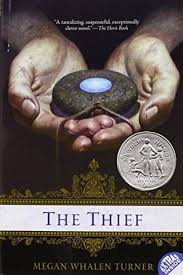 (Queen’s Thief series #1) First in the series, this multiple award winning young adult fantasy novel has an interesting premise and a tongue in cheek quality that tickled my funny bone. Gen is a thief who has actually been stolen himself from prison and embarks with his captors on a quest. They need him to steal a treasure from another land and he has no choice but to comply, although this plucky hero makes it abundantly clear that he has no intention of complying easily and has some tricks up his own sleeve–there is more to Gen than meets the eye, so keep an eye out for clues and double meanings. Along the way of the journey, stories are told which set the scene of this fantasy world that will continue in sequels, the next being The Queen of Attolia, which many reviewers have said is far better than this first instalment. There are three more after that: The King of Attolia, A Conspiracy of Kings, and Thick as Thieves.

To be honest, the beginning of the book felt as slow and plodding as the journey of the quest itself  (and perhaps that is the point), but the pace picked up in the middle when the big theft gets underway. There are some good twists and turns and though I’m not a big fantasy fan, it is definitely one of those ‘cross-over’ young adult novels that appeals to adults as well as to teens.