Tag Archives: Behind the Beautiful Forevers

‘Behind the Beautiful Forevers’, by Katherine Boo 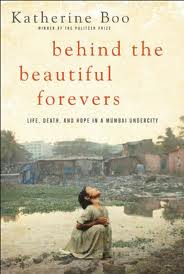 Guest Post by Dirk Booy: A very thoughtful colleague of my husband’s recommended a book that he knew both of us would like.  Well, it was immediately purchased on the Kindle, but Dirk got to it first, and read it on his iPad. Since it is about a topic that is of great interest to him in his life and work, I knew that I would covet his opinion. Here is Dirk’s reaction and I hope to read it myself sometime very soon, and perhaps add a postscript. Thanks so much for the suggestion!

As a development worker, I’m sensitive to the way some authors write about the poor. At times they are depicted as ‘noble peasants’ who can do nothing wrong and at other times the poor are lazy souls waiting for the next handout. Rarely do I find an author like Katherine Boo who so
truthfully captures the complex lives of the poor in her book Behind the
Beautiful Forevers: Life, Death and Hope in a Mumbai Undercity. Her true
story follows the lives of a number of slum dwellers close to the
international airport in Mumbai and captures their daily struggles in such
a way that both educates the reader but also helps us to see them as
neither ‘mythic nor pathetic’.

Boo’s narrative reads easily and draws the reader in quickly. Essentially
it is the story of one family’s struggle for justice after being falsely
accused of murder. As the story progresses, we are confronted with some of
the harsh realities of life in a Mumbai slum. The author deals with some
difficult questions like why the poor are often hardest on themselves and
why ‘the system’ is so corrupt. Although no real answers are given, it does
help the reader to at least understand the complexities of poverty.

Behind the Beautiful Forevers, is a great read and I personally found it
both entertaining as well as highly informative.