‘By Chance Alone: A Remarkable True Story of Courage and Survival at Auschwitz’ by Max Eisen

“If you survive, you must tell the world what happened here. Now go.”

These were the very last words that Tibor “Max” Eisen ever heard his father speak, and he spent the rest of his life fulfilling that promise. At the age of fifteen, Eisen entered Auschwitz and lost everyone he loved in a matter of months. Now at the age of 86, he says his heart is full again. Retired from business, Eisen works harder than ever as a Holocaust educator in schools and other institutions throughout the country. He also accompanies groups to Poland, all to ensure that the collective suffering of so many will never be forgotten.

For those of us who have European roots and family members who themselves went through WW2, this will be a hard one to read. His story is undeniably compelling, but for those of us already familiar with the atrocities, it may be difficult to face again in such detail. However, for young people who have never encountered war or for whom the Holocaust is unfamiliar, it is an important book to keep historical memory alive.

Eisen believes strongly that putting his story out there goes beyond historical education. Learning about the Holocaust for young people is crucial because it “puts their own struggles in perspective, encourages the protection of a democratic society, and helps them speak out when they see injustice.” Though Eisen has been speaking about his survival for many years, this book is the permanent contribution to that cause. He includes a number of pictures that personalise and enhance the story he tells. Will this one win Canada Reads 2019?

(Grades 3-5) Judith Kerr was a child in Berlin before the outbreak of the Second World War. Her father was a journalist who had to flee with his family first to Switzerland, then to Paris, and finally to England where Judith has lived ever since.

In the story, Anna (Judith) sees posters everywhere of a man called Hitler who she thinks looks like Charlie Chaplin, but has no idea who he is. Why does her father have to leave? Why is it suddenly so dangerous to stay? Where are they going to go? Because of Hitler they must leave everything they know and love behind, including a stuffed pink rabbit.

Judith Kerr writes and illustrates books for children. You may also know the Mog series based on the family cat, and The Tiger who Came to Tea. When Hitler Stole Pink Rabbit (first of the Out of the Hitler Time series) was written to convey to her children what it was like for her to be a refugee during the war. Her son had seen The Sound of Music and said, “now I know what you went through in the war.” She wrote Pink Rabbit to set him straight.  Even though her family was displaced, she has good memories of how her parents made it seem more like a positive adventure than being uprooted. She said she never realized until much later how hard it must have been for her parents to make the decision to flee to foreign lands. She has always been thankful they did.

Today I had the pleasure of being in the audience at a BBC recording and asking Judith Kerr a question. She is a very youthful 92 indeed and it was wonderful to listen to her speak about her life, art, and writing. There were several elderly war veterans who attended, having some connection to Judith and her family as well, and she enjoyed meeting them. In the interview it came up that sometimes people think that Pink Rabbit is a metaphor for “childhood.” She replied in a down-to-earth tone, “Absolutely not. Don’t read into it, it was just a stuffed pink rabbit!” She said her husband came up with the catchy title because he thought it would help sell the book. Well, he was right!

Teachers will find plenty of teaching resources online to use with this upper elementary book, focussing on the refugee experience as much as the Holocaust. Other similar books are Hana’s Suitcase by Karen Levine and Number the Stars by Lois Lowry.

‘The Storyteller’ by Jodi Picoult

Some people find Picoult’s novels to be increasingly formulaic and predictable, as she seems to crank out a new one every year. I actually tend to stick up for her novels, saying that she does deal with thought-provoking issues and is an expert at capturing differing points of view. So even though I am an avid Picoult fan, this latest book was rather a disappointment for me. To be honest the book fell flat and was not convincing, believable,  or developed enough, except for the flashback Holocaust section in the middle which was well done.

Although Picoult’s theme in ‘The Storyteller’ purports to be about mercy and forgiveness, I found the way that those were manifested in the ending of the story to be flawed. What she says about forgiveness is true: “forgiveness isn’t something you do for someone, it’s something you do for yourself.” But how the main character decides to forgive left me cold. I knew from an interview with the author that there was a big twist coming at the end and when I got there I realized I had predicted it long ago, so even in that…no cigar. Unfortunately I can’t be more specific about my issues with this novel, because I would have to include spoilers. I also found the gothic tale that runs alongside the main story to be awkward and unhelpful.

Sage Singer has secrets and is troubled and scarred both physically and emotionally. She becomes a baker, not so much because that profession runs in her family and she is good at it, but because it allows her to hide in the daytime and work at night. Sage befriends an old man who has dark secrets of his own and at the same time she learns that her grandmother is a survivor in more ways than one. The number tattooed on her grandmother’s forearm is a left over from Auschwitz.

By the way, the first printing of this book has the inside cover inscribed with many names and before I read the dedication at the front of the book, I had assumed it was a list of those those whose lives were lost in concentration camps. That would have been meaningful considering the topic of the book. They actually are names of her UK fans, probably one of the reasons the book is flying off the shelves here. Unfortunately that smacks of a publisher trying to boost sales and didn’t quite sit right with me in the context of a weighty subject like the tragedies of the second world war.

Her next one will be about elephants and grief and I am looking forward to reading it.

‘The Book Thief’ by Markus Zusak

The Book Thief is a young adult novel, but I haven’t met an adult yet who hasn’t found it profound. It is a highly readable,  unusual story, narrated by ‘death’. The writing is so good, it is probably the best and most creative book on the Holocaust that I have ever read.

Liesel Meminger is a little girl in Germany who goes to live with foster parents and is the one who steals books and uses them to feed souls. There can be beautiful moments in ugly times and Zusak captures these well. Some of the passages where death is narrating are oddly captivating. But there is also humour in this book and a life affirming lightness which uplifts and restores faith in humanity. It is no surprise to me that this book  has won many awards.

Some have said that the book has a slow start, probably because of the unusual narration and the metaphorical language. Give these passages at the beginning some careful attention and savour them, they are well worth it; the action does pick up soon after, and will not let you go.

This interview with the author captures the creative process the author went through in writing The Book Thief. It is worth watching. 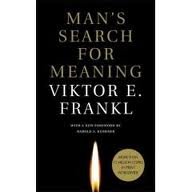 The Reader’s Bill of Rights includes the right to reread. One thing I do not consider myself to be is a ‘rereader’. But if I had a very small shelf labelled ‘Reread’, it would have ‘Man’s Search for Meaning’ on it, right beside the Narnia Chronicles, What’s So Amazing About Grace, and Supper of the Lamb. My copy of this book is heavily underlined and there are lots of jottings in the margins – also makes it quicker to reread!

This is a profound and important book. In our culture the pursuit of pleasure has become the ultimate goal, but this leaves us so empty in our human condition and in the problem of pain.  Happiness is not something that man can pursue, it must ensue. No matter what our situation, we can find meaning in our lives.

Holocaust survivor Viktor Frankl spends the first part of the book telling his own story of his time in Auschwitz. Though difficult to read, it does give a context for the author and it does let the reader know that the author is speaking from personal experience and has road-tested his ideas. Incidentally, his ideas on logotherapy were already developed before his stay in the camp, and in trying to remember and refine his confiscated manuscript during that time, he was able to find meaning in his experience and go on to help others find meaning in their lives.

What I appreciated most is that he does not come up with a “one size fits all” solution to the problem of pain, but recommends a creative attitude unique to each individual, and it has way more depth than just being positive. Everyone who reads this book will come away with their own learning, just for them.