‘The Huntress’ by Kate Quinn 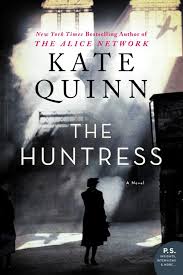 There are number of ‘women in war’ books that I’ve enjoyed: Code Name Verity, The Nightingale, and this author’s other book The Alice Network to name just a few. The Huntress is about war heroes, war criminals, and Nazi hunters. It’s also about journalists and photographers who were crucial participants in the war effort.

I found the book was longer than it needed to be but in the end I think it was well done and I’m glad I stuck with it. It’s not a quick read (until the last 100 pages), but still worth it both as background to the characters in the novel, as well as for historical content. I did learn a lot of new things about WW 2 which is amazing considering how many novels about that time period I’ve read. So kudos to the author for that!

Three narrators take turns telling the story: a battle-haunted British journalist, a feisty female Russian fighter pilot, and a young woman photographer in America who has a very mysterious step-mother who may well be a monster. I don’t consider that a spoiler because with a title like “The Huntress,” a reader would have to be quite dim not to see what was going on early in the novel and that’s ok. With that knowledge the tension builds in the present at the same time as the backstories converge to a thrilling climax.

‘The Dutch Wife’ by Ellen Keith

Marijke de Graaf and her husband are arrested for being involved in the resistance movement and deported to separate concentration camps in Germany. Marijke is given a terrible choice: to suffer a slow death in a labour camp, or have a chance at survival by volunteering to join the camp brothel. In Argentina, a political prisoner is also enduring captivity and searching to find ways to resist, even from his prison cell. The flyleaf promises that this novel is about “love, the blurred lines between right and wrong, as well as the capacity of ordinary people to persevere and do the unthinkable in extraordinary circumstances.”

Although this WW2 historical fiction offers a unique and candid view into the topic of war camp brothels, if it wasn’t a book club assignment, I might not have finished it. I found it hard to read because it felt gratuitously brutal and explicit in ways that were not necessary. The author makes the mistake of doing too much telling, rather than showing. I found the characters shallow, the Argentine thread out of step with the rest of the story, and the writing weak and immature, especially the ending. The whole ‘Stockholm Syndrome’ scenario just steps from where her husband was slaving away, made the book feel like nothing more than a cheap romance set in terrible times. In its favour, the author took on a weighty topic and made a highly readable novel that will appeal to many readers, and indeed already has, judging by numerous glowing reviews.

There’s been a lot of novels written about the second world war. I especially have liked the ones that feature strong women characters like Code Name Verity, The Nightingale, and The Alice Network. This is another.

Kiernan, author of The Hummingbird and The Curiosity, handles this historical fiction beautifully. The characters in the book are well drawn, with apprentice baker Emma at the center. Though heartbreaking and brutal as the stories of war can be, the dignity and triumph of the spirit in hard times is evident and makes the book still an uplifting one.

Set in France during the occupation, Emma silently and stealthily finds ways to alleviate the suffering in her coastal village. With quiet calm but with brilliant resistance, she fights back by blessing her villagers in a myriad of ways. Emma is a baker and is given a ration to bake loaves for the Germans. By grinding straw, and adding it to the flour, she is able to bake two extra loaves which help to feed hungry neighbours and that’s not all. Even under the watchful eyes of armed soldiers, she risks her life to build a clandestine network of barter and trade that sustains the village and thwarts the occupiers. But much more importantly than food or supplies, Emma brings hope.

‘The Lost Garden’ by Helen Humphreys 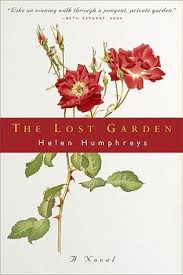 Book clubs always get us reading books we wouldn’t normally pick up. That’s what happened with this short lyrical novel set in WW 2. It beautifully describes the horrors of war from the relative comfort and serenity of an idyllic English country farm, sort of like refracted light.

In the spring of 1941 Gwen Davis leaves the chaos of wartime London to go to Devon. There her new job is to tend a neglected garden at a country house and to take charge of some Land Girls. Their job is to grow potatoes for the war effort. There’s also a house full of handsome soldiers in the house up the lane and a white wisp of a ghost flitting about. Gwen Davis at age 35, is completely unprepared for this assignment because as a horticulturalist, she relates better to  parsnips than people. “They are truly more reliable. The stupidity of vegetables is preferable to the unpredictability of people.” She discovers a lost garden, but also many things inside of herself that she never knew were there, like the capacity to love.

This is a beautifully written little gem by this Canadian author and poet, deceptively simple, subtly comic, yet with layers of depth.

‘A God in Ruins’ by Kate Atkinson

“A man is a god in ruins. When men are innocent, life shall be longer, and shall pass into the immortal, as gently as we awake from dreams.” Ralph Waldo Emerson

Oh the joy of sinking into a family saga by reading the sequel/companion novel right away! Reminds me of the massive English family sagas that I used to read by authors like Susan Howatch and Rosamunde Pilcher.

The main character in this book is Teddy, a minor character in Life After Life and Ursula’s little brother. He marries his childhood sweetheart and is portrayed as a gentle decent man, a long-suffering father to a horrible daughter who makes life very difficult for everyone around her. “He loved Viola as only a parent can love a child, but it was hard work.” Happily her two children grow up well despite their splendidly cantankerous mother (an ex-hippie turned novelist, “almost as good as Jodi Picoult”). Most of the book focusses on Ted as an RAF pilot in the war, working the strategic bombing commands over Germany. These missions were some of the worst, with very high casualties–as harrowing to read as the London Blitz sections in Life After Life, but all very well described.

A God in Ruins did not have the unique structure that Life After Life had, but she does toy with time a bit in this one as well, flitting back and forth. I did not find that annoying and I think it enhanced the story. Atkinson writes beautifully about everyday sorts of things but also using imagery, in this case about rising and falling, especially ascending in flight or falling back to earth. I think I liked Life After Life better, because of the way she played with infinite chances and possible scenarios, but I did love how some of the little mysteries in Life After Life were answered in A God in Ruins–another good reason to read them in tandem.